Ways you can use
the DDS Daughtercard

How many ways can you use a self-contained, high-precision signal source contained on a 1" x 2" plug-in circuit card? How about as a stand-alone VFO, a signal generator for your bench, a replacement LO for your Sierra or NC40 transceiver, or perhaps as the heart of an antenna analyzer! Control it with your favorite microcontroller, or even hang it off your PC's printer port. Any way you do it, you'll be generating quality signals for under $20.

1) With a PIC
It'll work directly with the PIC16F84A and the "siggen3" PIC DDS VFO project that started this whole craze.  One can get the PIC code from the HamPIC Resource Page (http://www.njqrp.club/ham-pic/projects.htm) and program the PIC directly to control the DDS Daughtercard.  Adding a rotary encoder yields a project that is a good VFO with bells 'n whistles designed by Craig AA0ZZ and Bruce AA0ED.

2) With the QuickieLab
It plugs directly into the NJQRP QuickieLab (http://www.njqrp.club/quickielab/index.html) to give that BASIC experimenter's platform RF generation capability. With the canned software available for this project, along with Joe Everhart's wonderful "Quickies" and "Test Topic & More" columns that focus on its use, this is probably the easiest and most flexible way to play with a DDS. 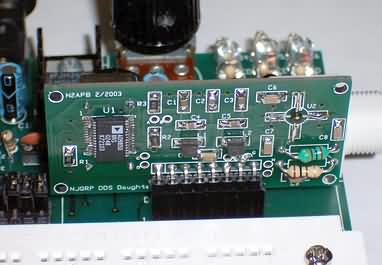 Photo of DDS Daughtercard plugged into the NJQRP QuickieLab project. Prototype DDS 'card is shown on the left, and the production version is on the right.  Note the small board space actually required for this VFO function. 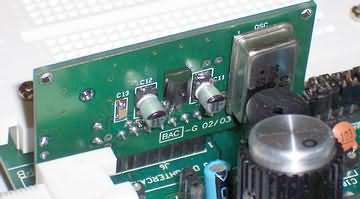 The back side of the DDS Daughtercard is shown in a rear view of the QuickieLab. (Prototype DDS 'card on left, production on right.)

3) With a custom controller
Of course you can also design the DDS Daughtercard into your own custom project, using your favorite microcontroller chip as the “brains”, be it a PIC, Atmel, Ubicom, or 8051-derivative processor. The possibilities are limitless!

4) With the Micro908
The DDS Daughtercard is already incorporated into the Micro908 kit from the AmQRP Club and is integrally used to make the instrument function as an antenna analyzer. So if you are able to write a specific VFO program for the Micro908, or perhaps just use the VFO function provided with the AA-908 software load on the Micro908, you can use the instrument to generate signals “right out of the box”. 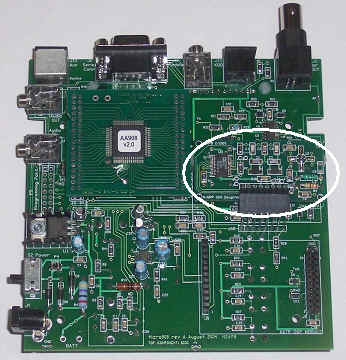 The DDS Daughtercard (identified by the white circle in the photo above)
Is controlled by the HC908 Daughtercard on the Micro908 motherboard.
It plugs into an 8-pin right-angle connector that holds the DDS card up
off the motherboard, above the reflectometer circuits of the Micro908.

5) With the Standalone HC908 Daughtercard microcontroller
You may also plug the daughtercard into the HC908 Excerciser board described in the Digital QRP Breadboard project and use the software provided with that project to have it serve as a programmable VFO.

The HC908 Daughtercard controller is a popular and recurring component with the DDS Daughtercard. Together they make a flexible combination of modules that can be used in many different applications, using a common set of software libraries (subroutines).  The configuration of the two modules shown in the right photo is the minimal hardware arrangement needed for a “dumb terminal” (like HyperTerm on a Windows PC or ProComm on a handheld computer) to command the HC908 to generate frequencies … in effect, the HC908 and DDS daughtercards become a remotely-controlled signal generator!

6) With a PC ...
Control the NJQRP DDS Daughtercards from your PC. The DDS-330/60 cards can be easily wired to the printer cable on one's PC and controlled by a program running on the PC.  All you need to do is wire up the parallel port cable to the DDS card as shown below and then run either of two programs: DDSFreq (by WA6FXT) or "DDS Controller" (by WA6UFQ).

Connect the DDS Daughtercard to the parallel (printer) port of a PC, turning the PC into the 'control panel" for your VFO.

See the latest information and full description of features at the WA6UFQ site: http://home.austin.rr.com/wa6ufq//ddscontroller.html

Download the installation package for the DDS Controller program, v2.4.1.

WA6FXT "DDSFreq" PC program
DDSfreq, by Mike Hasenfratz, WA6FXT, serves as a VFO 'front panel".  This Windows program presents a window with settings that can be entered for frequency, phase, serial port, and start/end frequency, which instructs the program to continually update the DDS programming register with the next frequency in the series.

The first window to appear when running DDSFreq provides
control of the control word sent to the DDS chip. Another window
provide control of Sweep.

Before you are able to control your DDS Daughtercard from your PC, you should enter your computer’s parallel port address and the value being used for your DDS reference clock oscillator into the Properties window.  From the main window above, pull down the Edit menu and select Properties, which then shows the window below.  Most often your clock will be 100 MHz, and the address of your parallel port will be ‘378’ as shown below.  If your port is different than LPT1: then you will need to change that value to what you have.  (Consult your Hardware Manager in the Control Panel to see the details about your LPT ports if you have trouble.)

7) With a KG6CYN-designed ATmel Microcontroller
It can easily be controlled by the ATmel micrcontroller chip used in the Trevor Jacobs KG6CYN DDS VFO board set.  Although one could change the oscillator to use a 120 MHz version as Trevor used, a more straightforward and easy way for guys to use this neat VFO program would be to just change the software to use the 100 MHz oscillator used on the DDS Daughtercard.  After all, it's just software constants that determine the base incremental unit of the control word issued to the DDS - one can just change the software in a couple of places and be rockin' with the DDS Daughtercard.  (I opted to keep the AD9850 top usable frequency at 30 MHz ... there's not as much use for the 30-40MHz frequency range by most HF hams, and keeping the oscillator correspondingly lower offers a tad less power consumption and heat generation. Besides, with a 100 MHz oscillator its directly usable with the popular DDS code mentioned in #1 above.)

8) With a W8DIZ-designed ATmel Micrcontroller
I've been corresponding with Diz (W8DIZ) and without letting out too many of his plans, he said he's also working on some ATmel code to drive the DDS Daughtercard.  I think this is just great!  [I've got to get myself set up with an ATmel development station of some sort.]  So pretty soon we'll have another microcontroller that one could connect up to the DDS 'card.

Here's an example of the DDS Daughtercard (the prototype version) plugged into a specialized project.
Again, note the small space needed to fit the DDS  'card.

But note that all these ideas essentially generate a "VFO" as a standalone unit.  That is nice and everyone sure could benefit from having a solid, precise signal generation device on their bench ... but we've only scratched the surface because there are many uses for such a stable VFO in OTHER projects.  For example ...

8) In a lab-grade Signal Generator
There's been some discussion over the past couple of years concerning how one could build a very stable frequency generator suitable for lab bench work.  This entails using a DDS (or a PLL and DDS combination) to generate the stable and variably-controlled frequency source, and the precise control of attenuation on the output of that signal source.  We're working with an individual who thinks that the DDS Daughtercard may be the way to go at the heart of that design.

9) With the KD1JV "Butterfly" Controller
KD5TFD writes: "When I built my SoftRock-40, I wanted to perform some experiments and pair it up with a DDS Daughter Card from the AmQRP to give it more tuning range, so I replaced some of the components on the SoftRock-40 board with headers so I could tie-in the DDS signal from the daughtercard. Using an NJQRP DDS Daughtercard and an Atmel AVR Butterfly controller card, I was able to create a VFO using KD1JV software. I figured this would make a good LO to drive the SoftRock-40, so I connected them all together using a carrier board from ERCOS Technology, with the result shown below.

SoftRock-40 (on right) being controlled by an AVR Butterfly card driving an NJQRP DDS Daughtercard, thus replacing the fixed crystal oscillator and allowing the SoftRock-40 to reach across the entire 40m ham band.

These are all "food for thought" and ideas for the workbench ... if only we all had more time to explore them!  The beauty of this approach however is that there's likely at least one idea listed here that has the ability of striking the sweet spot for homebrewers on the list.